This is totally just a collection of screensavers for Playdate*. Yup, nothing weird or special. There’s no game in it. Also, screensavers would be very useful on a device with a cathode-ray tube monitor. Or perhaps some OLED screen. That’s not what Playdate is. However, you can still chill with the screensavers. And loading. Oh my, there’s a lot of loading and you won’t be standing idly by.

* What is Playdate? It’s a tiny console from Panic! If you don’t have the console, you can also play the game in a Playdate Simulator (even on Steam Deck, haha), but it’s much less cute and yellow experience. If you have Playdate but don’t know how to sideload games onto it, you can follow this tutorial.

Please don’t look for any minigames, hidden content, secrets or even easter eggs in there. There’s no way there could be a novelty two player mode hidden in there. Just chill with the screensavers. Not that I’m telling you what to do.

Note: The above text may contain misleading information regarding the content of the game for the purposes of our company zero-spoiler policy. There’s a bit of a hidden content in there. Somewhere. At least our CEO did promise me that. (See the game manual on page 451 when—or perhaps if—it’s released. Or just try pushing some buttons. Paper is super-expensive these days.)

“Made me happy, then angry, then happy. Hints helped.”
— Voxel Says You Should (Voxel)

“Somewhat recently I played it a lot.”
— ?/? (Would You Please Provide Attribution Podcast)

If you encounter any problem or unexpected behaviour, you can send me a DM on twitter @MouflonCloud or just add a comment below. I’ll try to reply asap.

In order to download this game you must purchase it at or above the minimum price of $4.95 USD. You will get access to the following files:

Generally just a few tiny fixes and a new launch animation :-) Thanks for noticing!

There will be a proper devlog soon (and a walkthrough), I didn’t want to post during the anti-sale ;-)

pretty simple game, loved the part when you turn the crank

thanks! just curious: on a scale of 1 to 10, would you recommend docking and undocking crank repeatedly to your friends?  [:)]

This game is fantastic!! I went into it expecting a unique experience, and it exceeded my expectations. I would love to see more updates with new screensavers over time! I will definitely be using these to play on my desk while I work.

Thanks! I’m really glad you liked it!

I hope to see more from you in the future! The comedic bits were hilarious too, very funny :D

Oh,  Flying Toasters are hilarious but also hella complex! Some of the animations and choreographies are magical and it all adds up :) I wanted to draw everything by hand and mimicking their style is hard.

However, I have some updates planned (not only because I already found one thing I built and forgot to include in the final game 😅), so maybe there’ll be one update with that little bit of a burnt toast smell :)

There's a 1-bit verion out there.  I used to have it (maybe still so if I search for it).  It was simple green flying toasters against black - a joke as if the saver existed before the Mac and this was the DOS version.  I'll hunt for it if it would help.

Thanks, it’ll definitely help :) I tried googling it a bit, but the original is pervasive.

I think that the variety of animations is part of its magic, but then again, I could do just a basic version and see whether it would be enough on its own :)

I stayed up way too late tonight hunting and hunting for this.  I remember it becasue I had it, and the internet is omniscient so the info *must* exist.  My Red Bull fueled persistence paid off.  After three hours of hunting, the word "prototoasters" popped to mind.  That's what that 1-Bit toasters saver was called.  Armed with that keyword I soon found an interview with After Dark creator Jack Eastman where he says Prototoasters was a module in After Dark 4.0 based on his original prototype artwork.  Interview is here.

Then I found another page with images of both the prototoasters and the final, more familiar ones.  Both in 1-Bit. Hopefully you can either chase down an old copy of After Dark 4 or use the 1-Bit images to create sprites.  The images show the wings in both the up and down positions.

The prototoasters (and flying toast) in the 1-Bit image look exactly like the Prototoaster screensaver (except in After Dark they were DOS green in keeping with Berkeley Systems' motto "Agressively Stupid."  :)

EDIT: After writing this I noticed that my second link is to ⌘GET INFO, the web site of gingerbeardman, who's developed several Playdate games (Daily Driver, Bender, Sparrow Solitaire, Circular, among others).  He wrote at length about Tomoya Ikeda, the artist who created the 1-bit toaster artwork based onEastman's prototyping.  So it stands to reason gingerbeardman would be on board with making the toasters fly on the Playdate via Stars of the Screen.  Perhaps he could be of assistance.

Omg, this is so good! I’ll have a free update some time in October. And I hope I’ll be able to capture some magic of Flying Toasters without completely ripping them off :) Also wow, it’s great to find out how people in the playdate community are very cool even beyond their pd apps.

(Sorry for a belated reply, I fell ill with covid right after my last message.)

It’s completely unrelated, but some of the humor and attention to detail found in Ikeda’s illustrations reminded me of another japanese artist mostly unknown in the West, Tiger Tateishi (I tried to create a Wikipedia page once and it got removed, but since then I got two of his books as a present from my wife… so next time it will be properly sourced :D).

Haha love the description parts of the game ^^ 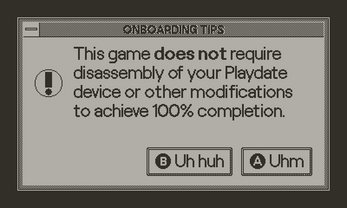